skip to main | skip to sidebar

Virtua Cop 3 is starting to work.

Well, I spent my entire Saturday afternoon working on Cxbx for one request (now do you know how much I love you guys?) and finally got a result worth posting.

Okay, I have good news and bad news.  The good news is that it's finally confirmed that Cxbx is capable of emulating Sega Chihiro games.  Good thing, because it's a load off of my mind.  The mystery was killing me!  The bad news is that there are some parts of the JVS I/O board may have to be emulated in order for games to work.  Instead of emulating the JVS, I've been skipping and ignoring the port mapped I/O access functions as well as just creating stubs for the hijacked JVS functions.

This screen shot is proof. 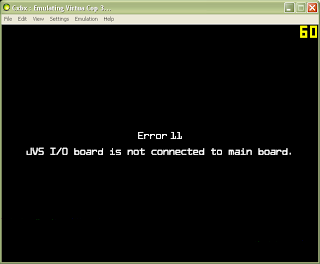 Although I'm very pleased to have reached this far with Virtua Cop 3, I'll have to further research Chihiro's JVS hardware.  There's a chance that we may not have to emulate it though, since JayFoxRox's emu managed to get passed this.  It's probably a matter of satisfying a few conditions.

I'll put more work/thought into this later.  It's passed 1AM and I'm tired.  I'm just glad it's showing something for the time being.